Those of you who have followed my Twitter and the blog long enough will know that I’ve achieved a decent amount on Football Manager over the years. You’ll also know I’ve always struggled to achieve one thing: an unbeaten season. And this pisses me off pretty bad.

Since the last blog post, the Dortmund save has pushed on three and a half more seasons. In that time we’ve won literally everything possible; every trophy we’ve competed in, we’ve won at some point in that period. But the thing that still eludes us is the unbeaten league season. At time of writing, we’re in the 2022/23 winter break and we’ve got 39 points from 14 league games, and we’re absolutely dominating all comers. But, yeah, you guessed it, 1 loss.

Despite scoring 41 in that time (3 per game) and conceding only 4 (0.3 per game), we still managed to lose a game. Bayern are in second place, and having played three more games than us, they’re still 8 points behind already. Unless a minor miracle happens, we’ve almost already sown up the league.

Because of this I’m going to spend the rest of the season preparing my plans for next year, when hopefully we’ll finally be in luck. I’ll be going all out next year to ensure we are able to prepare any approach to break down any defense and stop any attack. I’ll be breaking all the financial and squad building rules I usually have for FM, and just create a squad to do what I never have before.

As documented in previous updates, this Dortmund squad is built around lightning transitions and high pressing. The team is therefore not only full of technically excellent players but also incredible athletes. Despite not having a distinct shape of choice (I’ll go more into this later), we do have a set of Team Instructions which will only deviate slightly dependent on the gameplan. 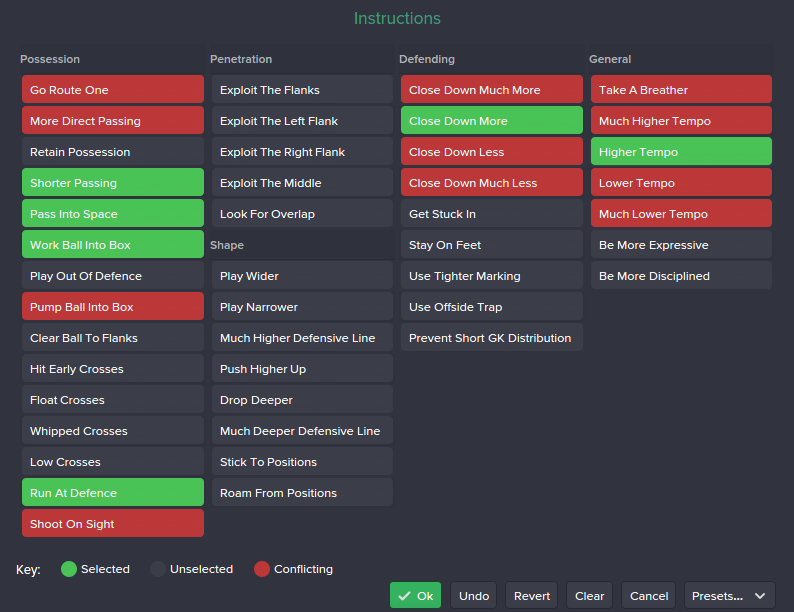 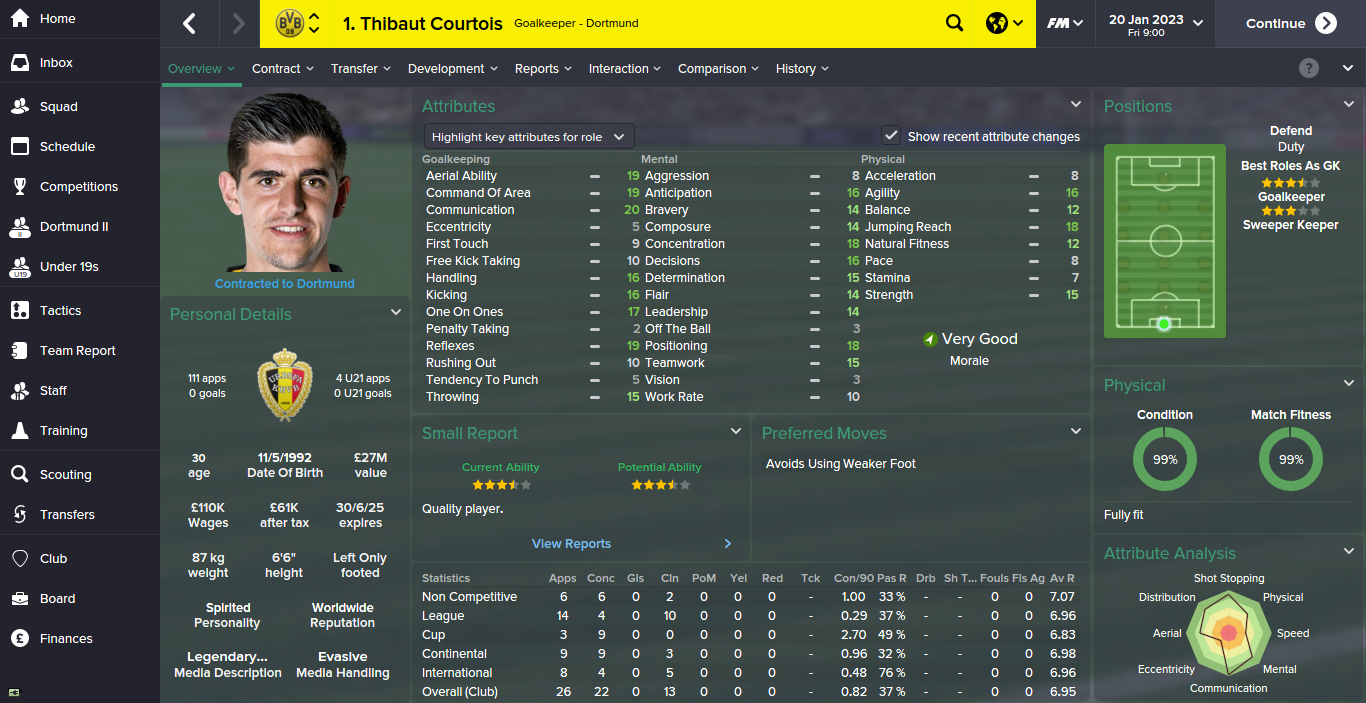 Despite two young keepers in reserve, Courtois is the man who plays every game. Signed for a fairly sizable £31m fee from Chelsea in 2020, he’s proven to be worth every penny. Since then, he’s conceded roughly 0.5 goals per game, and approaches roughly 20 league clean sheets every season. He’s a massive part of why the defense is so successful because he can deal with any attacking approach. His only real weakness is his sweeper keepering, which he’s not really used for anyway.

We previously had Timo Horn as backup & cup game keeper but after receiving a £30m bid (oh FM, never change), there was no way we were going to keep him on the bench. As a Model Professional, it would’ve been nice to keep Horn around for his tutoring of the young keepers, but the few he did tutor seemed to fall out with him anyway: goody two-shoes.

At 30, Courtois will be at his peak for next year, and will probably have several more seasons left in him after that. 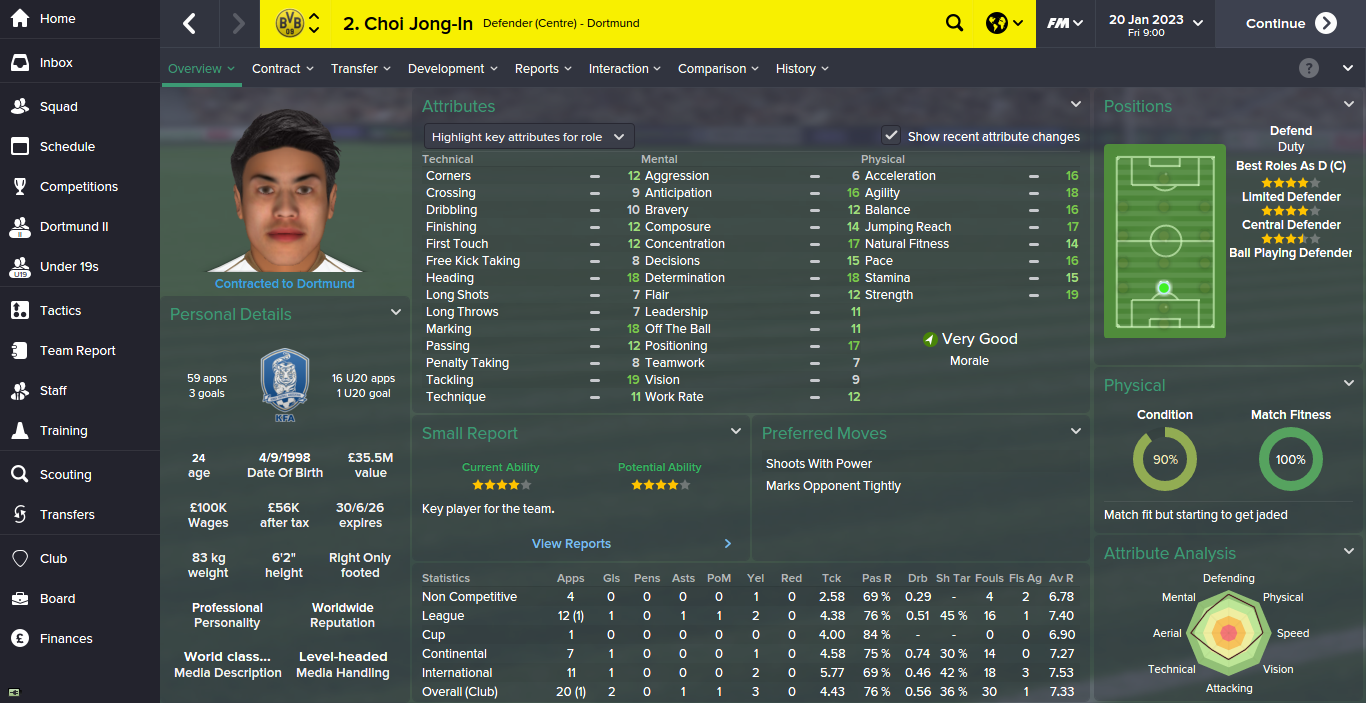 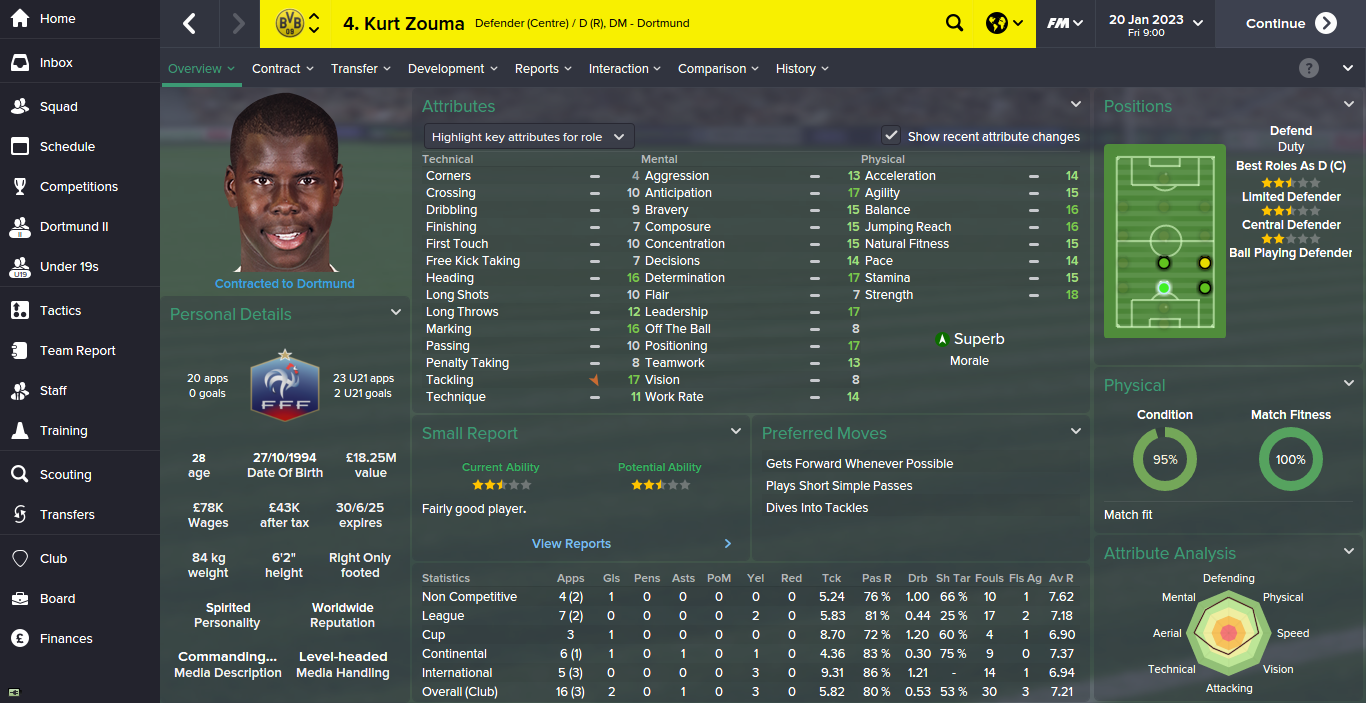 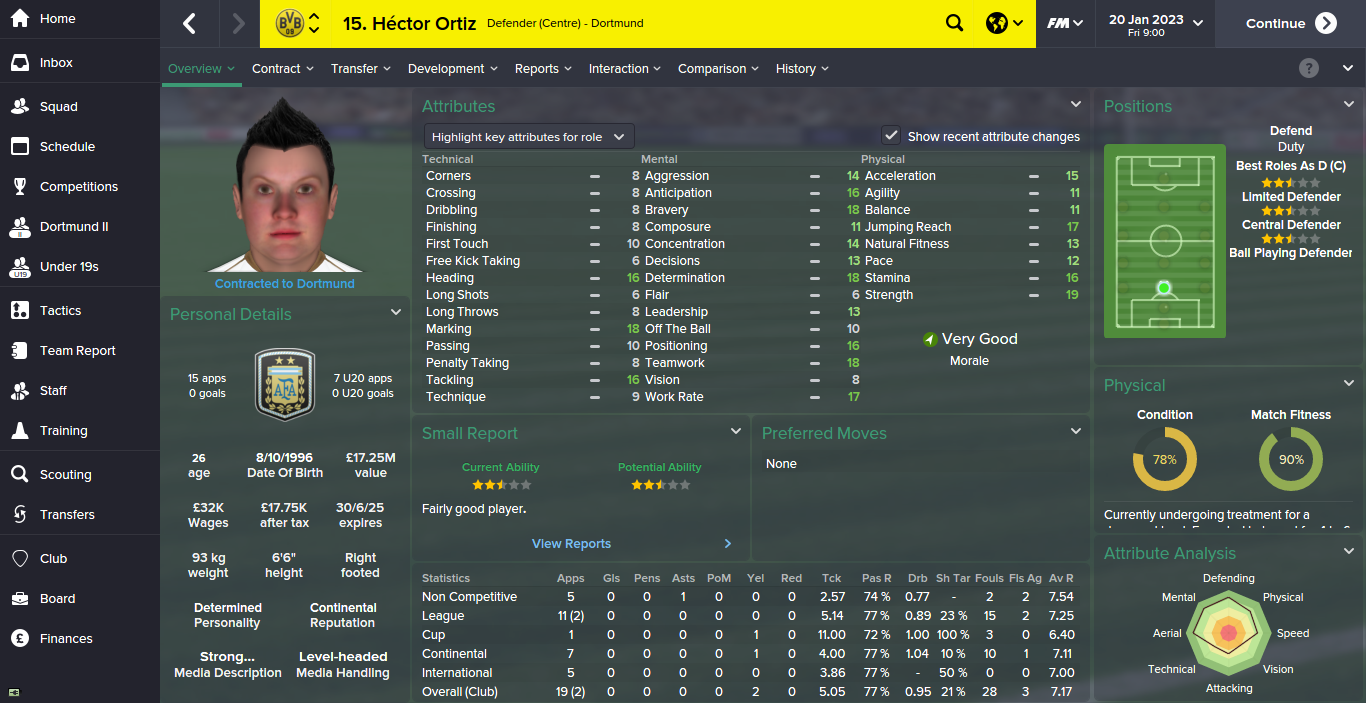 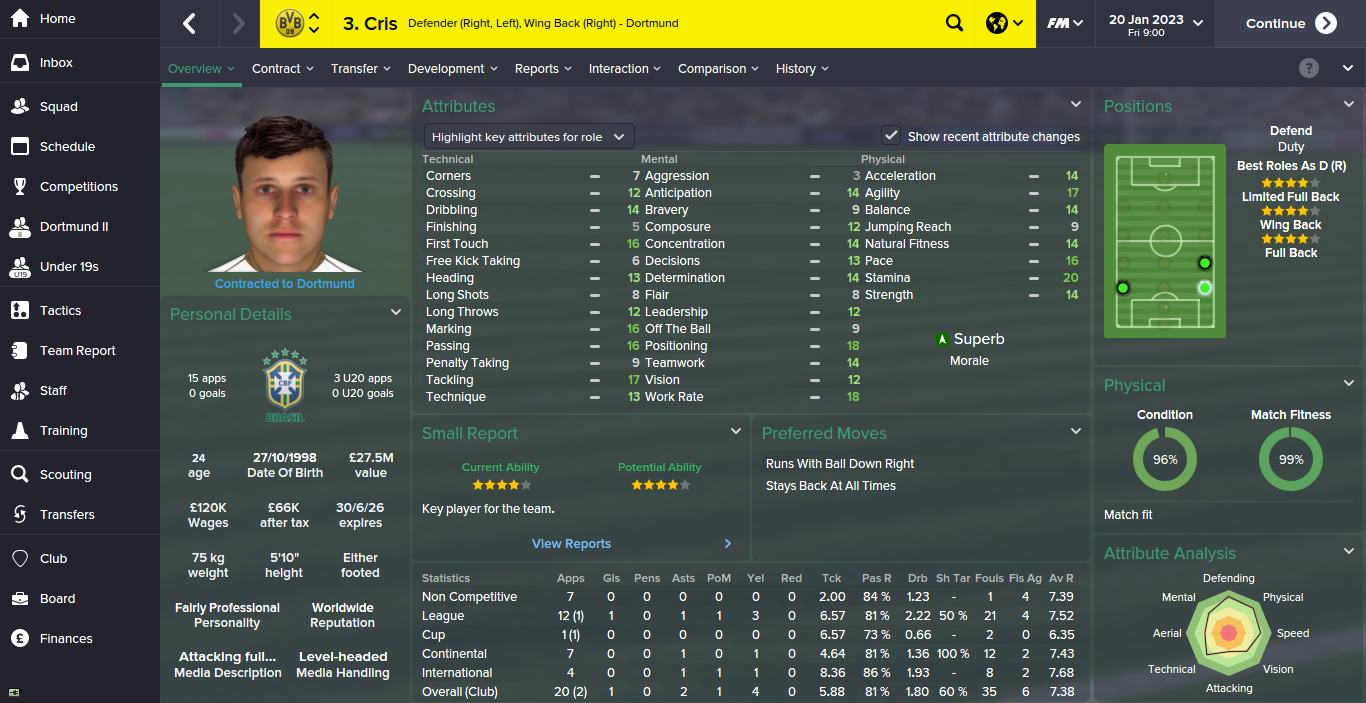 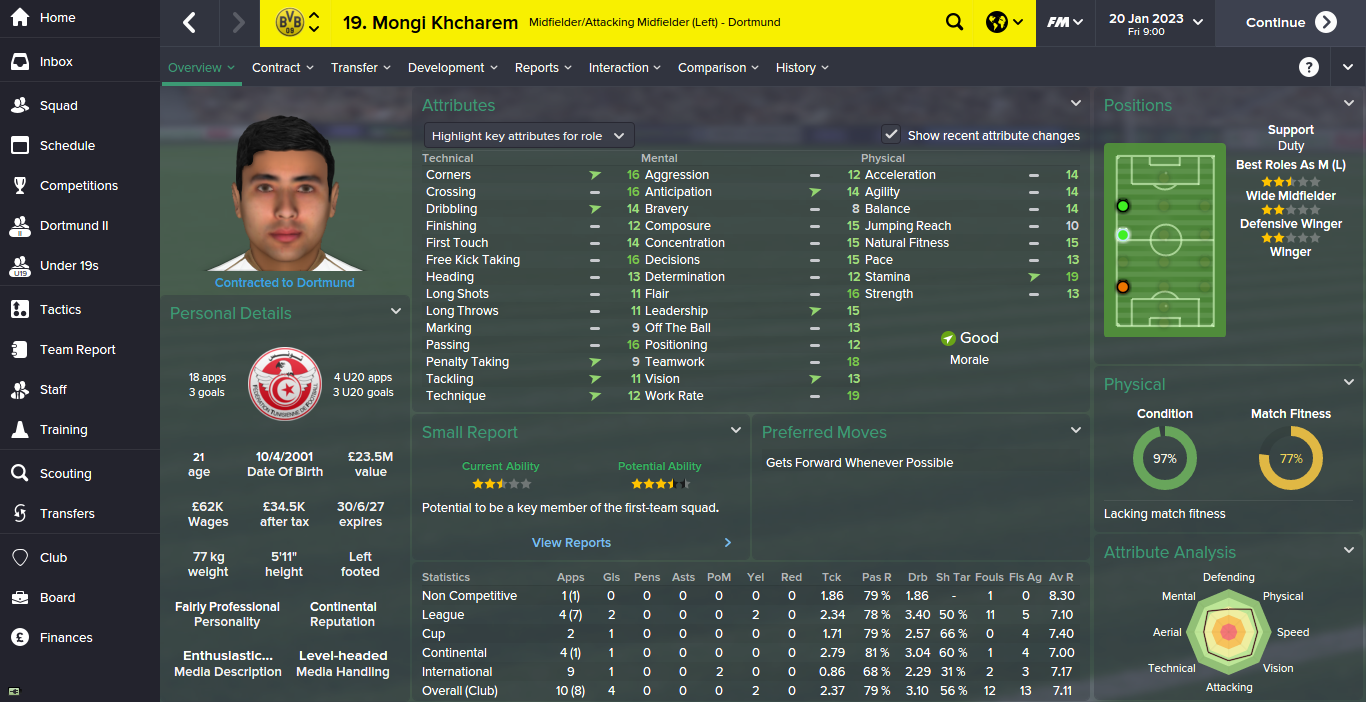 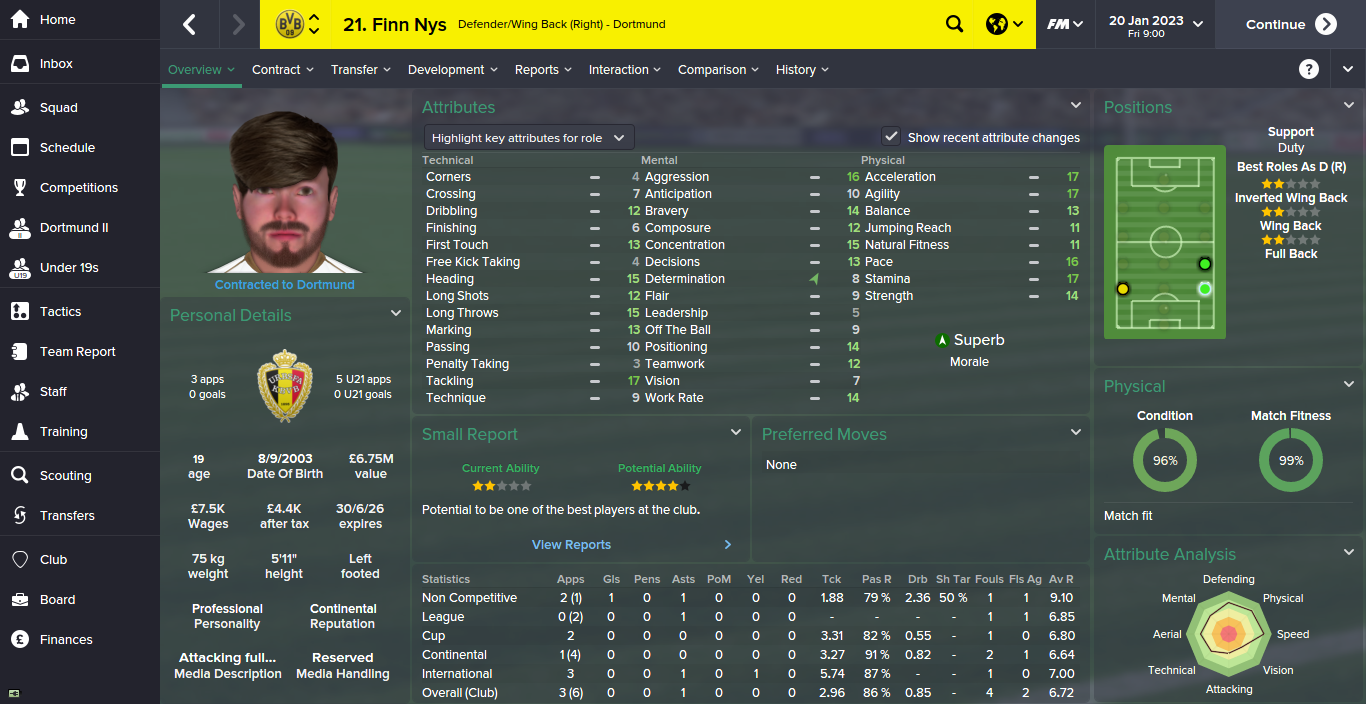 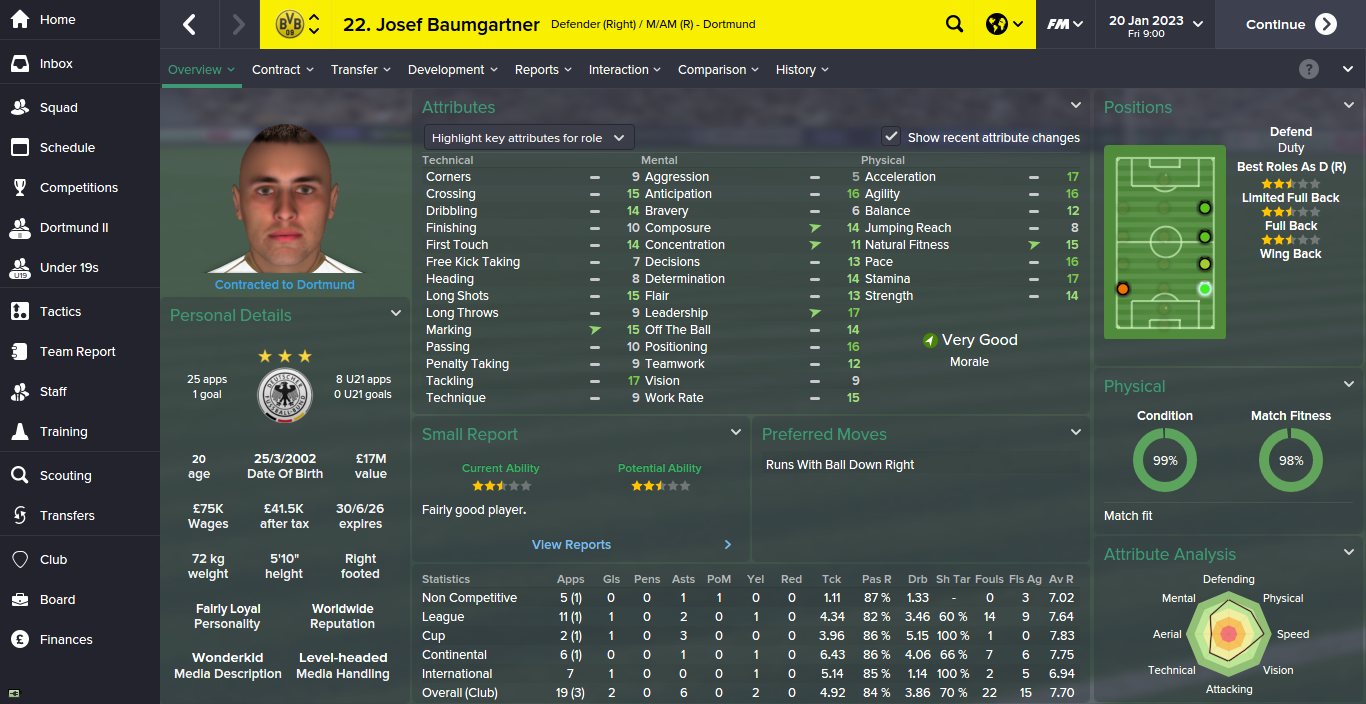 Our defensive stocks don’t look particularly healthy, on paper; particularly given Finn Nys is very much still developing and Mongi Khcharem is hardly a defender at all. But the plan is to give both a fair shot in the second half of the season in order to develop them into fully functioning defensive options for my onslaught on the unbeaten season. Once both are integrated, the squad will have a number of different options. If all goes to plan, we’ll have the right player for any situation.

In central defense, the partnership of choice has been Choi Jong-In and Kurt Zouma for a while now. More recently, Hector Ortiz has grown into the role and by next year he and Jong-In will be first choice. We’ll occasionally use three central defenders against certain formations (such as two up top and one at CAM), which may necessitate the purchase of a fourth CB. It’d have to be someone who can either adapt to playing elsewhere, or is happy with little game time.

The main assets here are Cris and Choi Jong-In.

Cris cost a hefty £41m from Atletico, but provides an incredibly versatile and solid full-back option. Either at right or left back, Cris is almost always in the team. He’s a defensive first full-back, but with handy attacking attributes, he can make an impact further up the pitch too.

Choi is an absolute monster. Not only are his base CB stats excellent, but he’s probably the most physically gifted player in the squad. His pace + acceleration means that playing with a high line is often an option, despite Courtois’ poor sweeping ability. 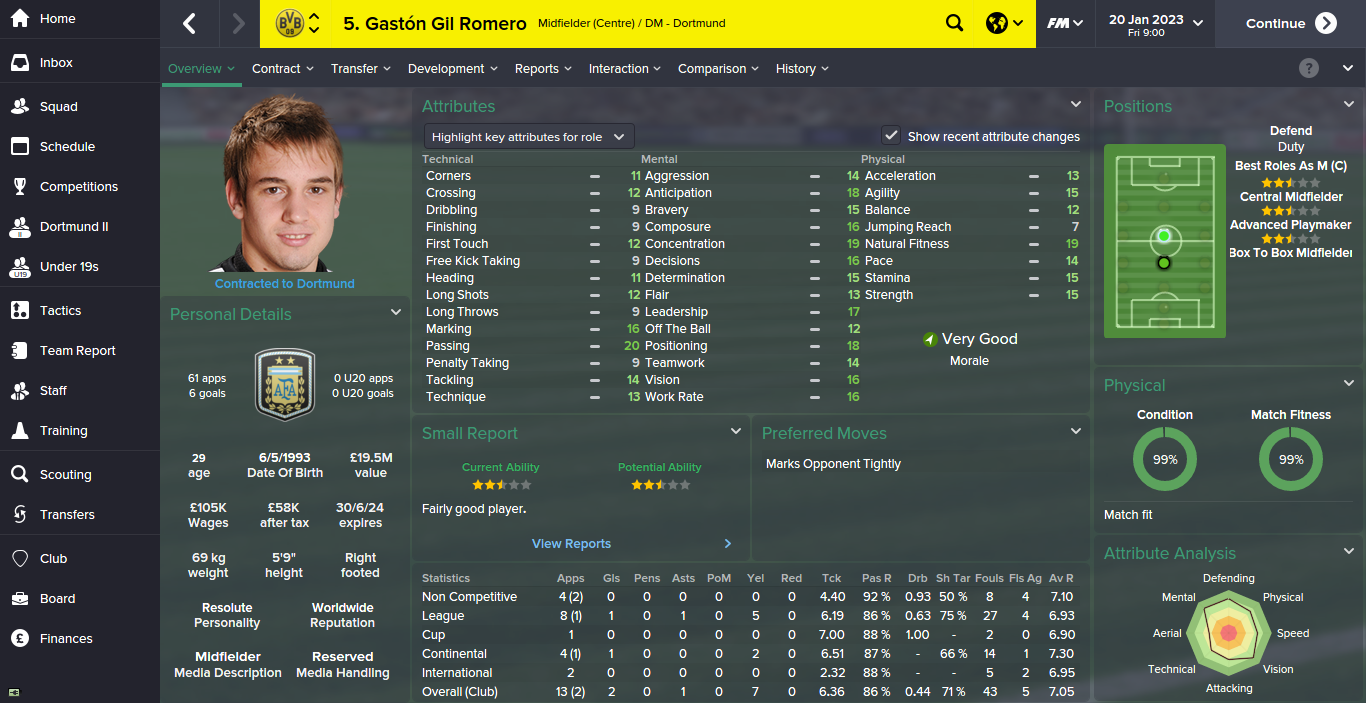 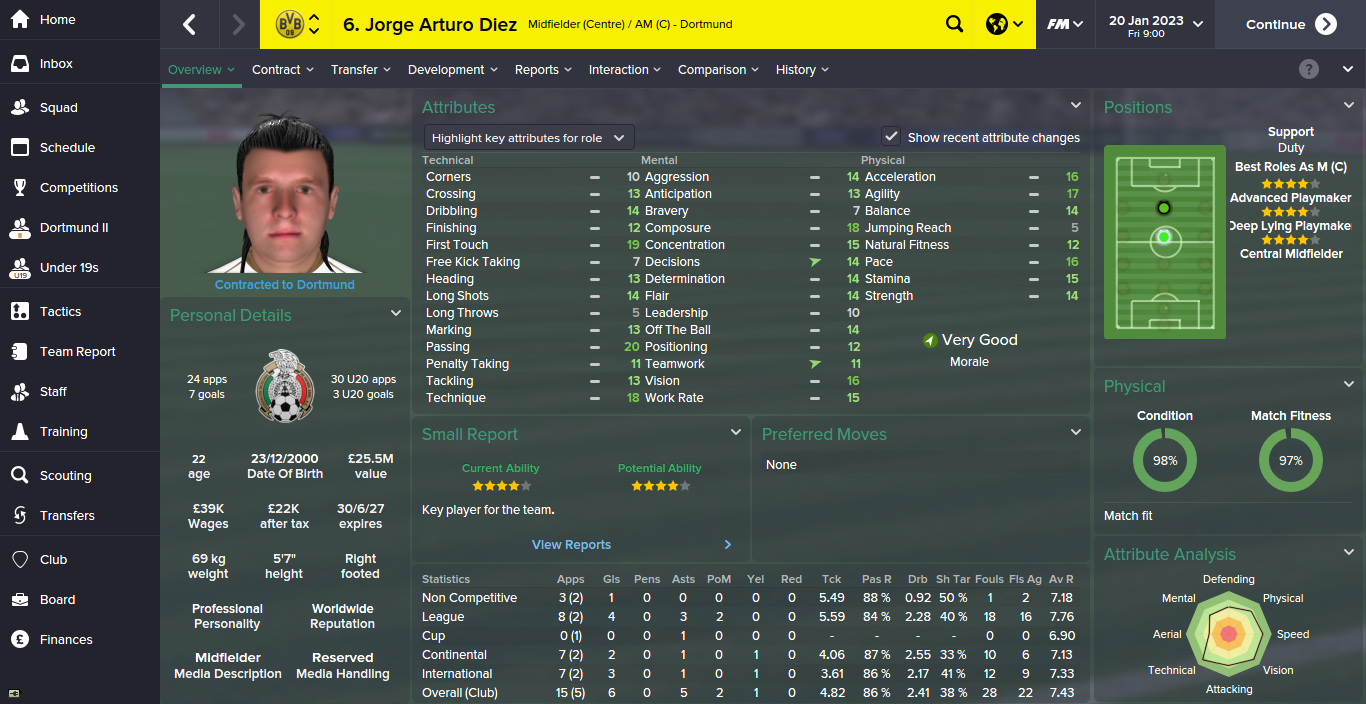 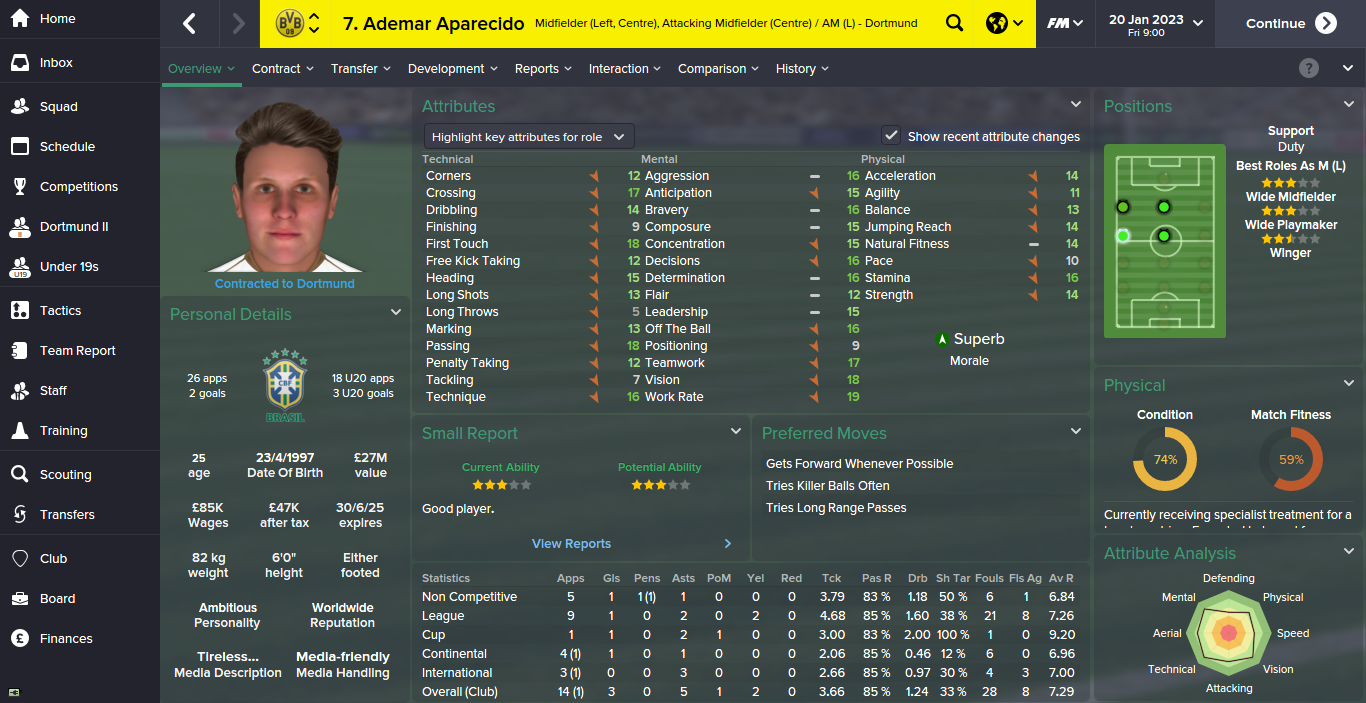 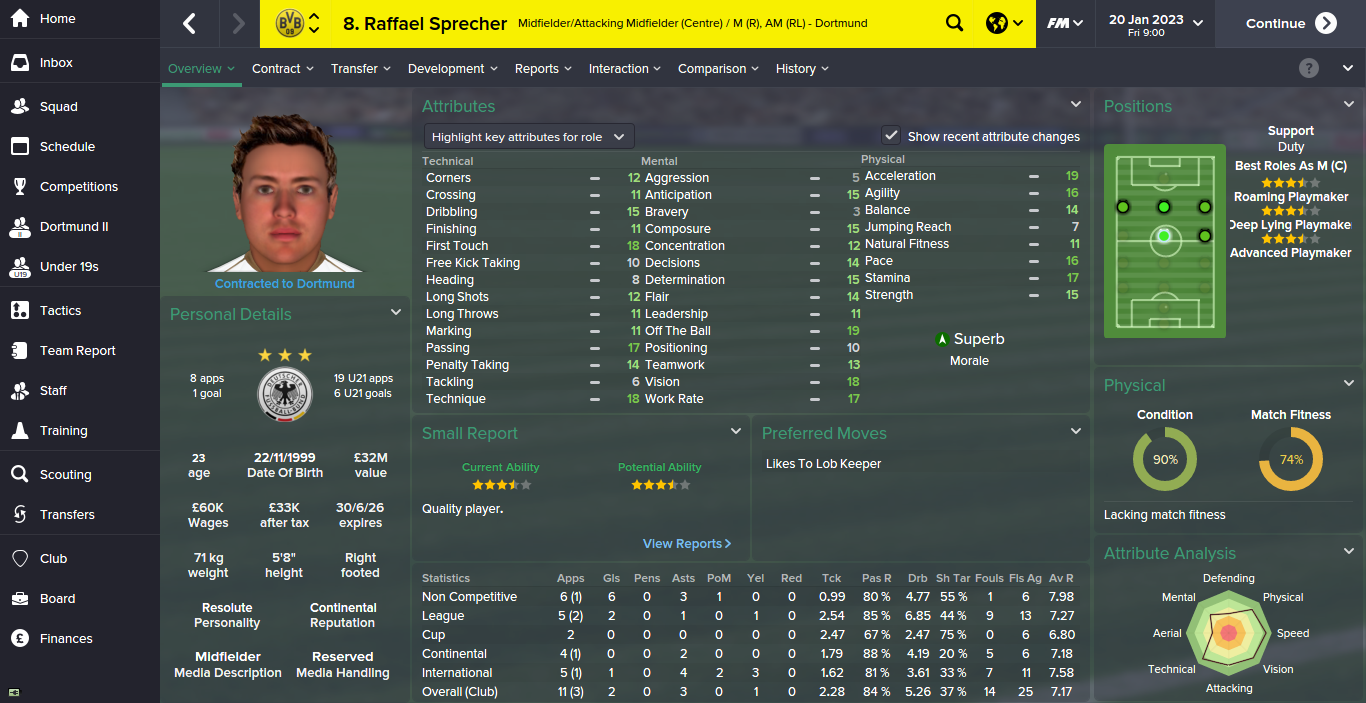 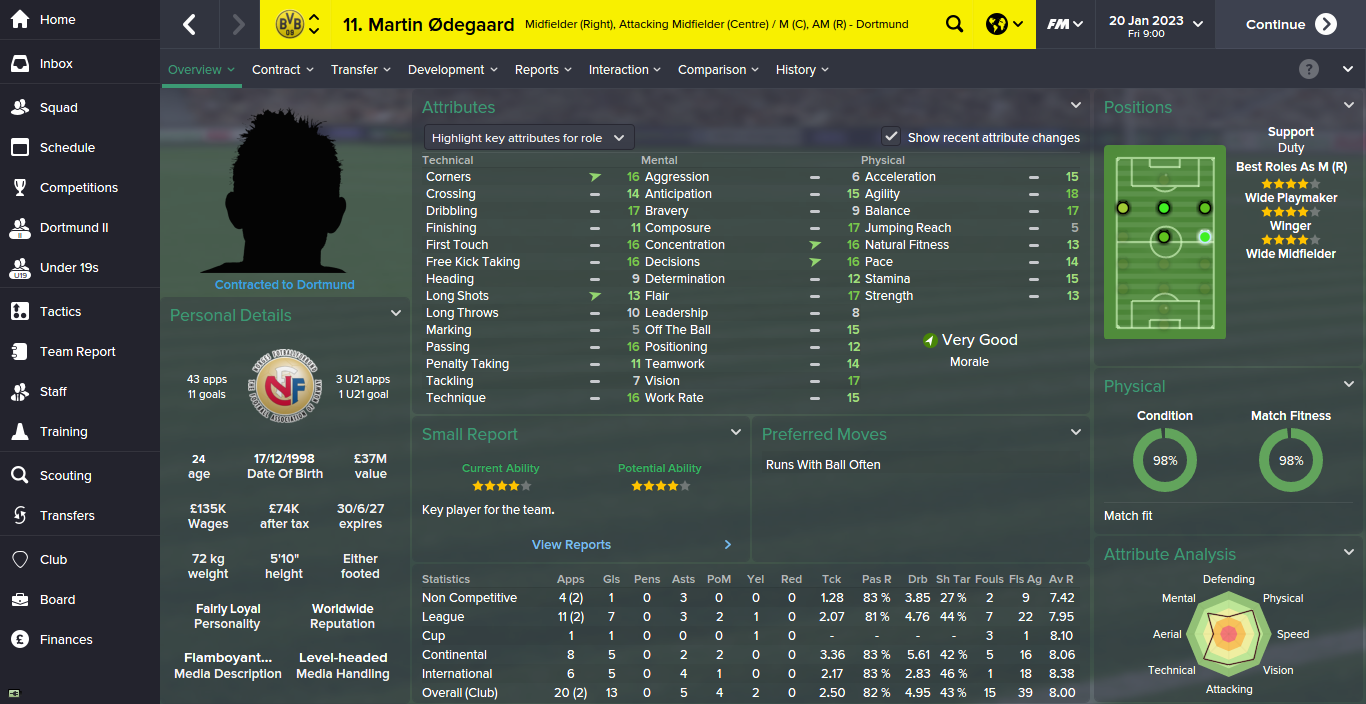 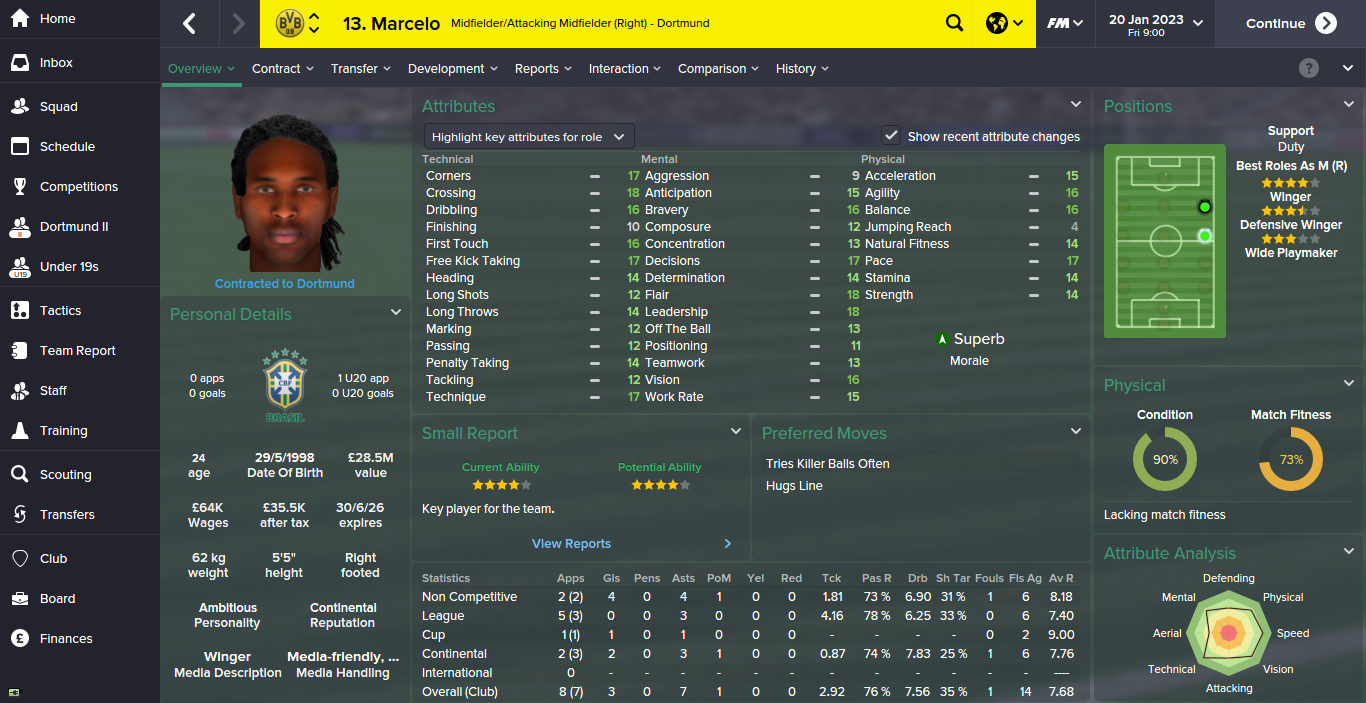 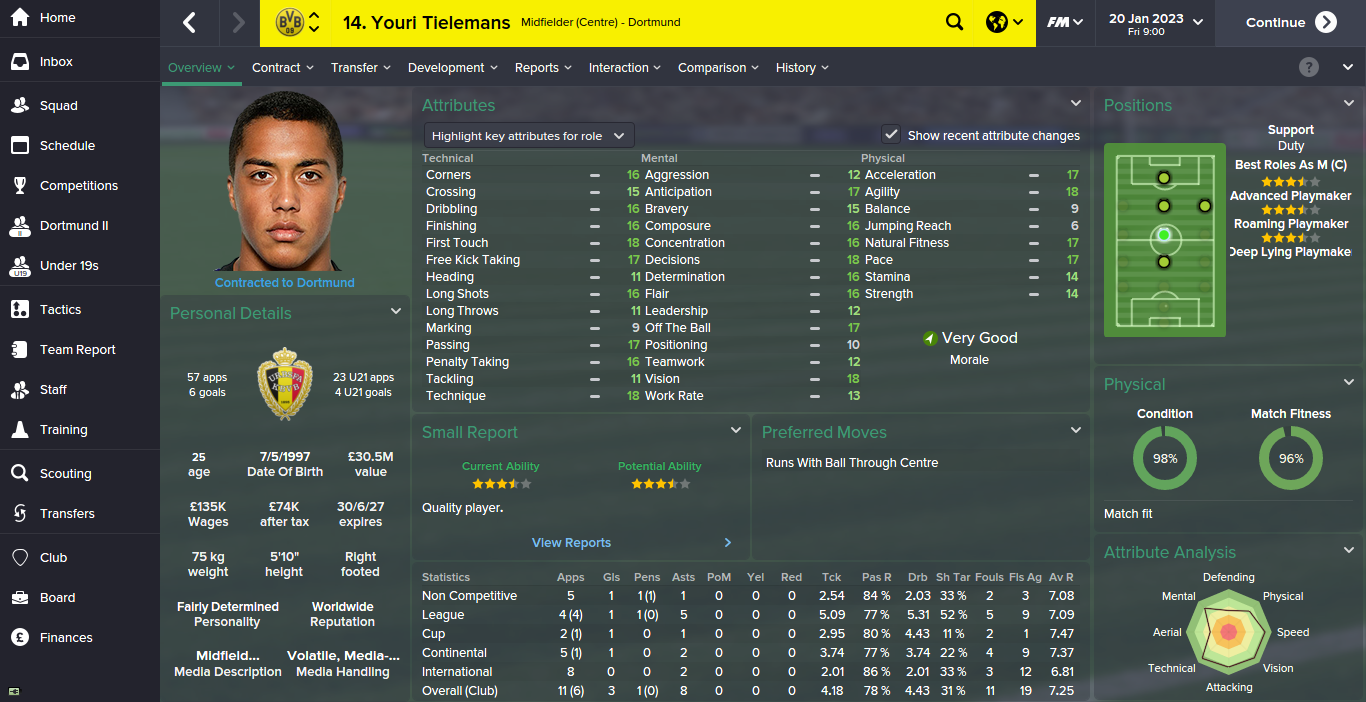 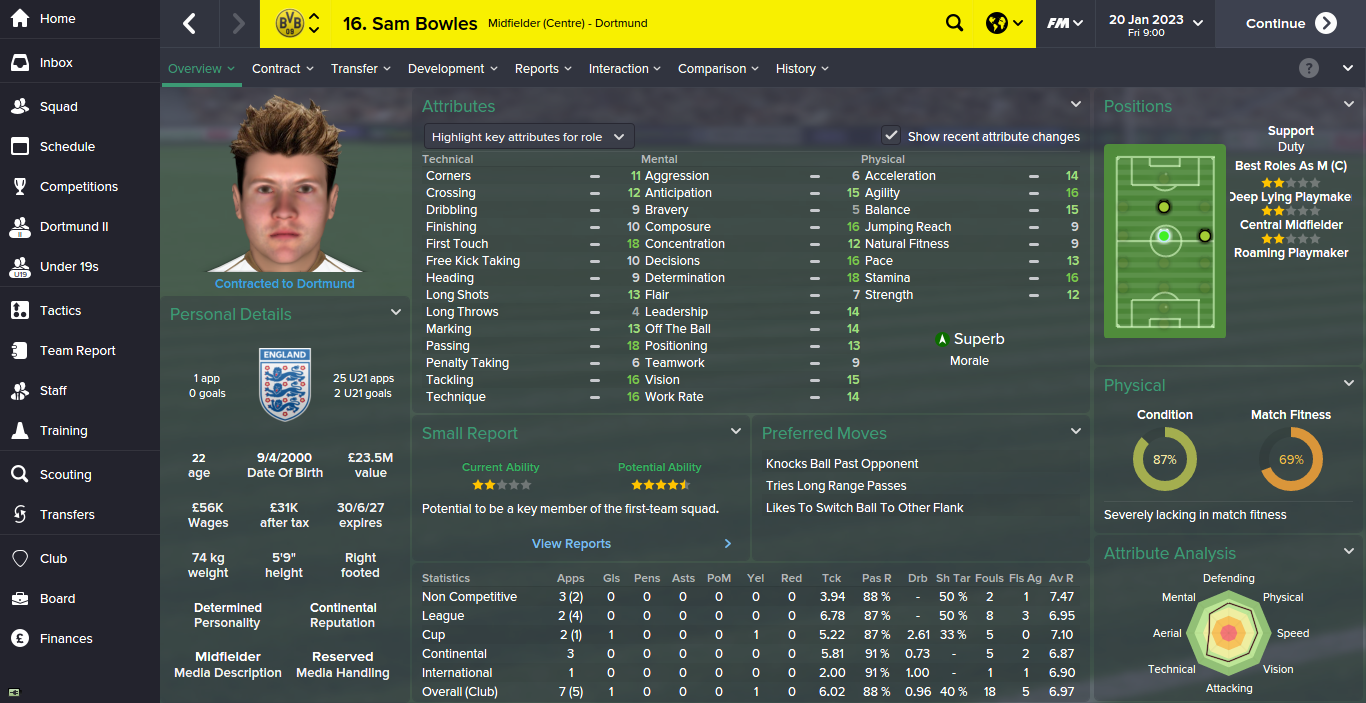 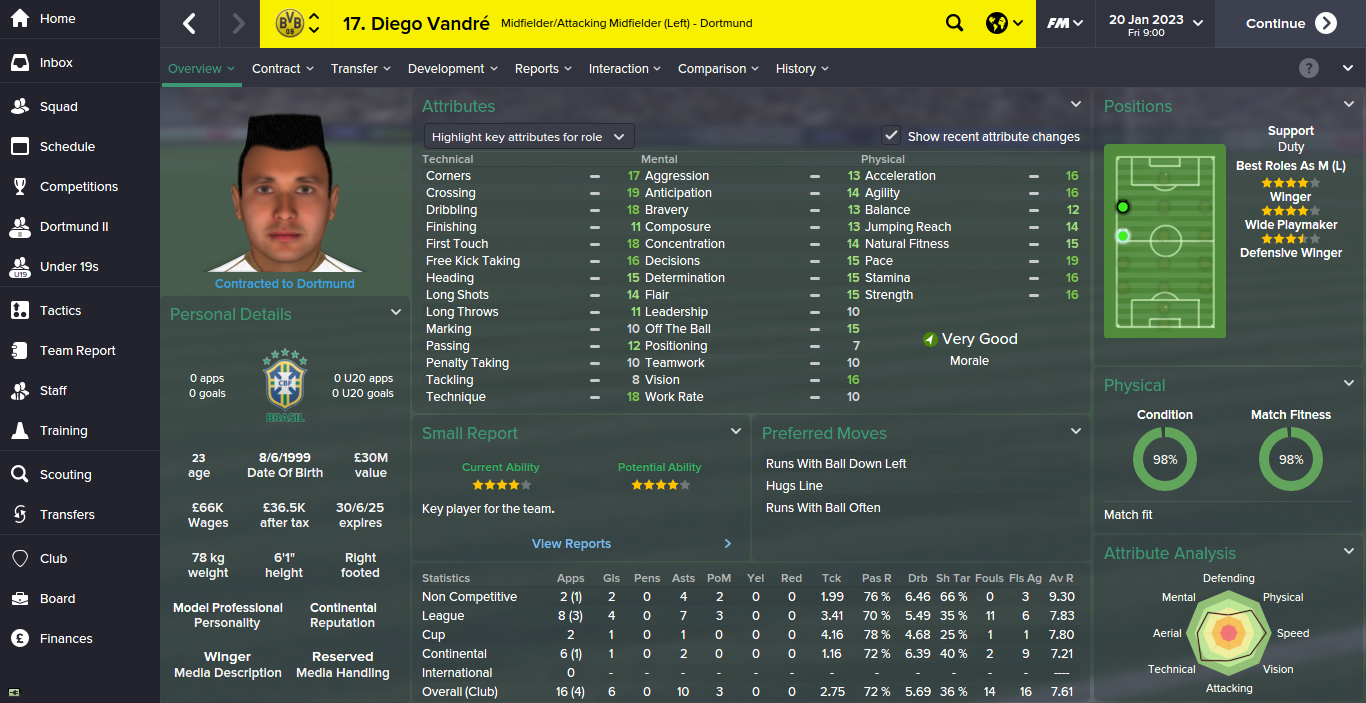 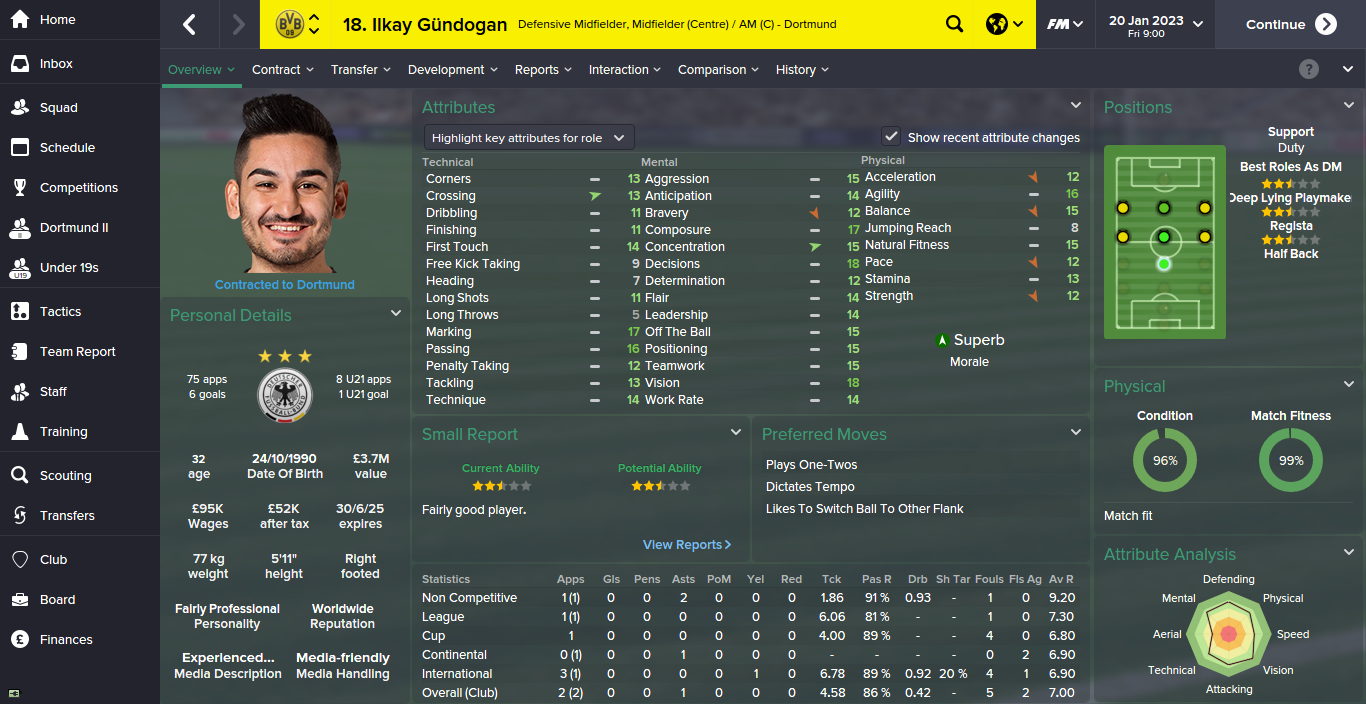 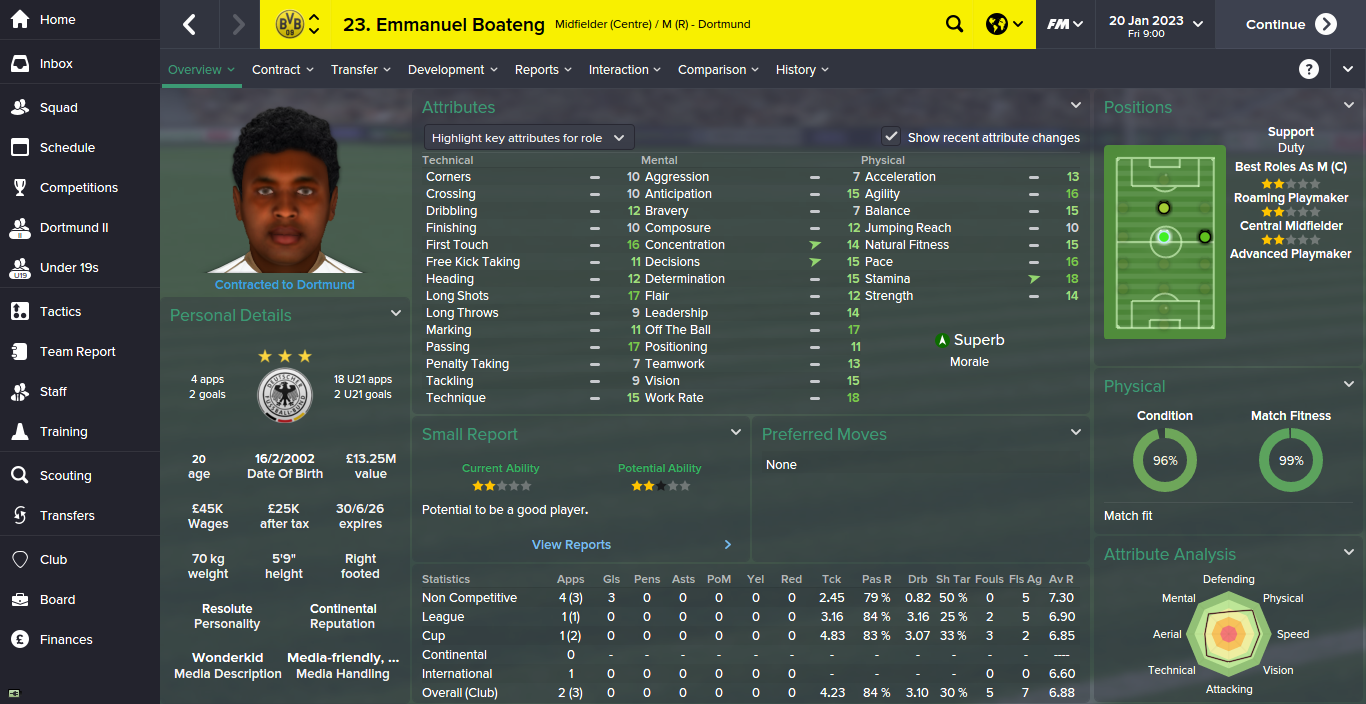 Midfield is where it starts to get interesting, and where most of our in-season tactical variation will come from.

The star players here are Martin Odegaard and Youri Tielemans. I mentioned in my last update how good these two were, and the team has been built around them since. We’ve certainly improved our midfield options, but these two are my go-to options in big games. From MR, Odegaard managed to get over 20 league goals and 20 league assists in the same year, which is a first for me on any FM. And combined with Tielemans, who is probably even better attributes-wise, they make a deadly combo.

Ademar Aparecido and Jorge Arturo Diez are what I’d call my ‘glue’ men. They hold the midfield together and in tricky games can add an excellent balance to any tactical system. Both players have plenty of ability themselves, but in a squad with a number of star players, it’s vital to have players like this. Diez in particular has plenty of ability, but Aparecido is the squad’s true utility player, and can play anywhere in midfield. My two favourite roles for him are either as a WP-S with an overlapping wing-back, where he sits in the channel and pings balls everywhere (thanks to his PPMs), or dictating play from deep as a DLP-D against weaker teams.

As well as that, we’ve got the option for an out-and-out winger on either side in two Brazilians, Diego Vandre and Marcelo. I always like having at least one of these two in the team because it adds another dimension to the attack. We currently don’t have a big striker able to make the most of the wonderful crosses they regularly deliver, but this is something I’ll look to change.

In terms of adding to the midfield, I would really like a genuine ball-winner. I just can’t find one. Paul Pogba fits the ball of what we want perfectly, but Juventus are demanding £100m for him which is ridiculous for a 29-year old. Let’s see what we can do with a bit of tapping up. 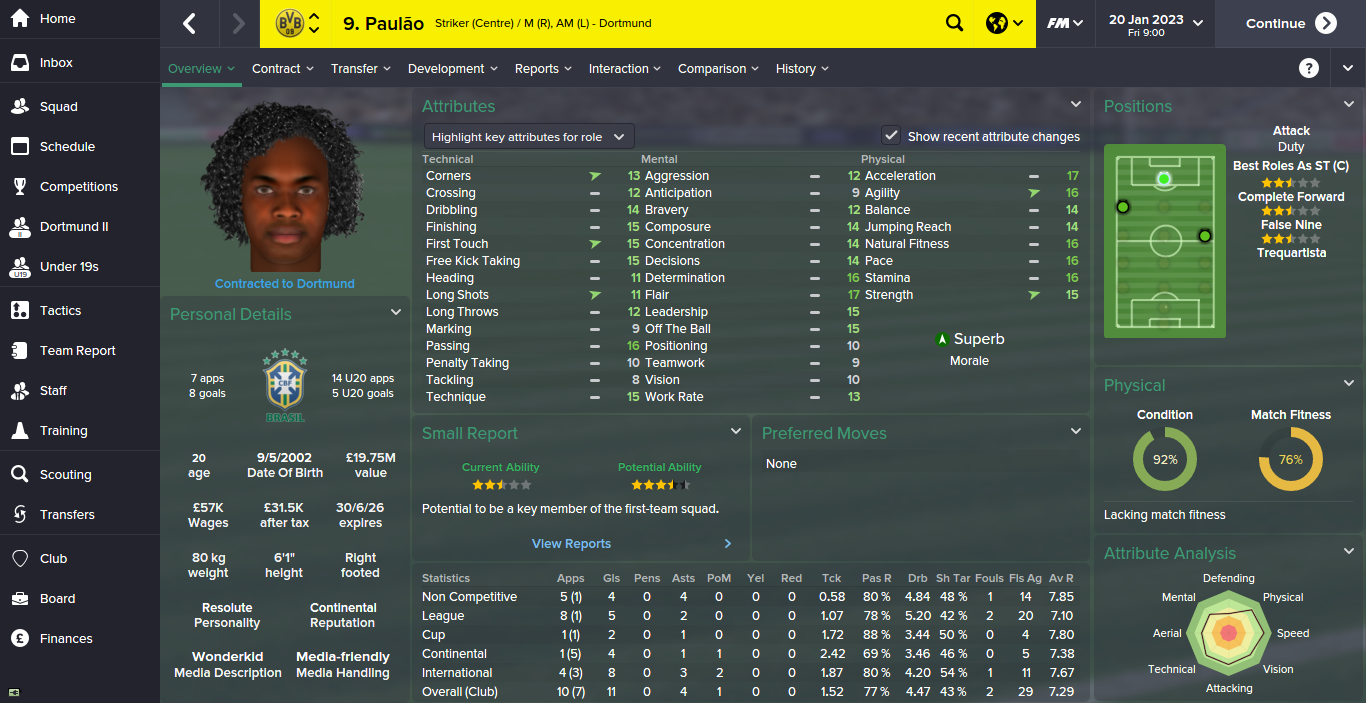 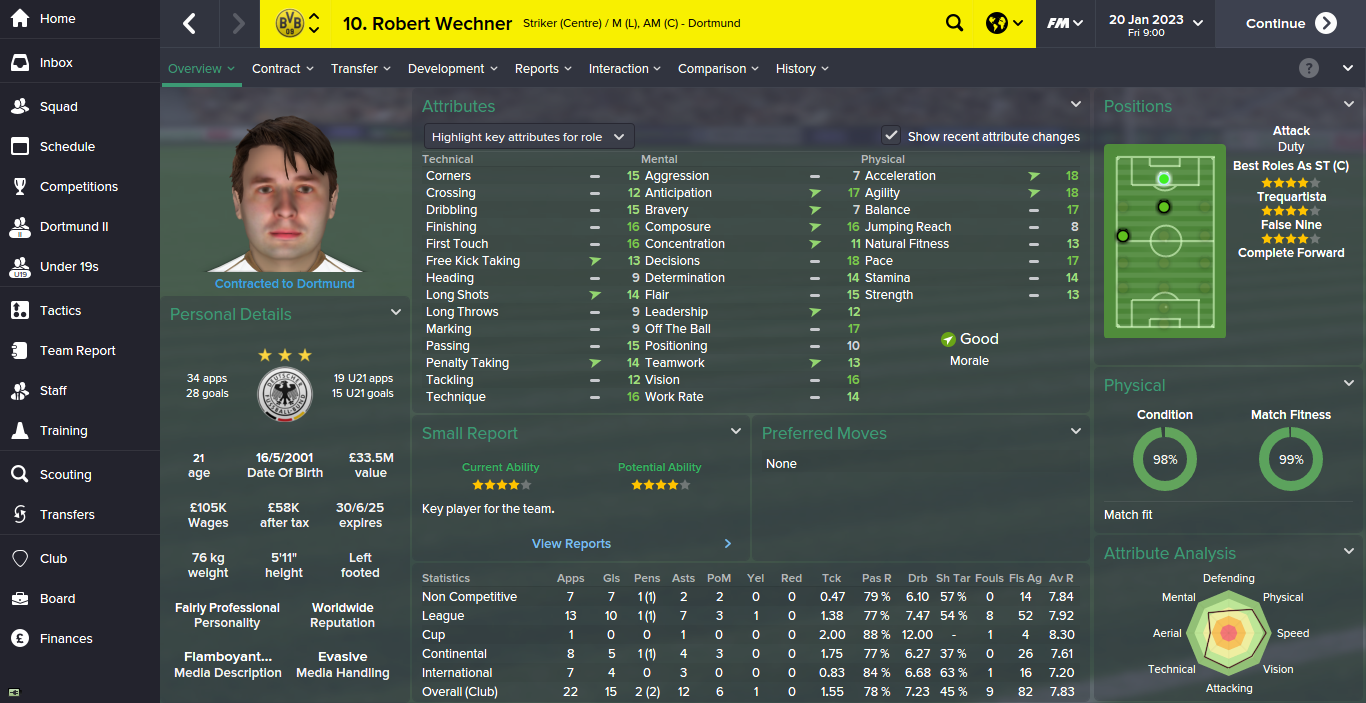 Robert Wechner is my pride and joy. Having come through the Dortmund academy, he’s been my first choice striker since he was 17 and he’s richly rewarded me. At age 21, he’s already had 3 20-league-goal seasons and is on course for another. His attributes also mean he’s far more than a goalscorer and is excellent at bringing his teammates into play, meaning he is excellent as a lone striker. This is particularly important in big games where our 4-1-4-1 is often preferred and the lone Trequartista has a very tough job.

Paulao joined this season for £22m, to act as goalscorer. If we want to play a 4-4-2, we now can, with Wechner dropping off and Paulao staying high. His only disappointing attribute is Anticipation but he has plenty of potential and lots of other ways to score goals.

Our forward line is relatively bare, but I’m kind of okay with that. Youri Tielemans is able to occupy a role as a Trequartista from CAM if both the forwards are unavailable and any more would mean a lack of game time for someone. Despite this, I’ll be looking to get a big man in. The difficult, as we found with Marouane Fellaini a few years back, is that they often disrupt the flow of the game and the pace of our counter attacks. It’ll be difficult to find a big guy capable of doing it all. If we can’t find one, then we’ll have to pound Paulao on the heading & jumping training.

Coming soon will be an update detailing the approach I’ll be taking to the season itself, with brief analysis of the different situations we’ll expect to come up against. In the mean-time, if you’ve got any thoughts on my approach then let me know. Also, I’d love to here from anyone who has managed to get an unbeaten season. Teach me your secrets.

If you enjoyed the Football Manager content, and wish to read more from me on real-life football, you can. I have a blog specifically for my football analyses at 13steps, here: